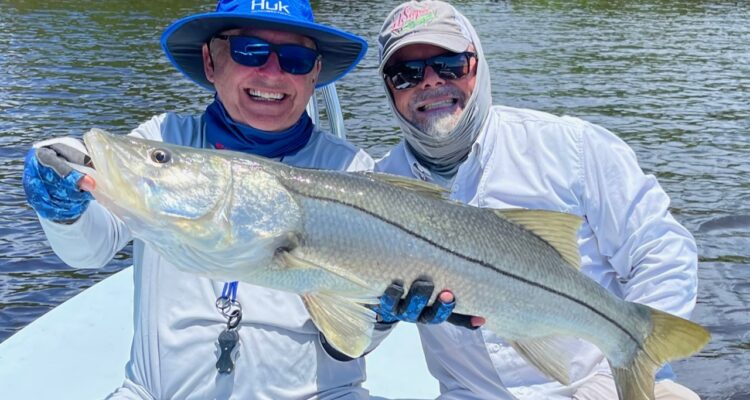 It feels like forever since I’ve given a report. I have lots of stories to tell. I’ll start with this one, it’s actually the latest. I recently had a three boat trip with six anglers from Texas, two of which I’ve fished several times before, Tim and his fiancé Maritza. I had my friends Andrew Bostick and Brandon Laszlo help out.

As with any trip when there’s a group of anglers, they always come up with some sorta “the big fish wins” format. Well, on day one, everyone caught lots of fish but I could only know at the time what my boat was doing and by noon we had not caught anything of any size.

After 12 pm we were just kinda fishing around and one of my anglers caught a 28” snook, at least something we could actually photograph for the “tournament”. At the dock at 2 pm we learned that Brandon’s boat had a 28”er, so it was a “tie”. Day two, similar story. Lots of fish but nothing huge.

At close to noon we hooked a snook, and landed it, that measured 33”s. That a really good fish but still, you never know how the other boats are doing. At the ramp we learned that we had the big fish for the day. Win for our team! Day three, I had Tim and Maritza, we had lots of fishing but not quite as good of catching. We ran into Andrew and his anglers around lunch time and they informed us that they had a 38” snook… talk about feeling defeated. There’s no way to beat a fish like that unless you go look for a tarpon.

So we took off and ran to a place I thought we might catch a 20-30”er. They were there but not biting. After 30 minutes or so of casting to rolling fish Tim hooked up. The fish took off running but didn’t jump. I told him to get ready for a jump when all of the sudden the fish came up and shook its head, “Holy Smokes, it’s a huge snook!”. Then the fish ran to the bank and got caught in the trees, Tim gently worked it out only to have it run back into the trees again. He successfully got it out a second time and we got it to the boat. I grabbed the fish and told him, “if you wanted a 38”er, you may have just got it!”. All we had was a yard stick for measuring and she was 2-3” over the 36” mark. Unbelievable!!!

So as it turns out the teams decided the two fish were so close that they agreed to a tie. In the end, my boat had two ties and a win, I’m happy about that, but I’m more happy that Tim caught his fish of a lifetime in the closing minutes of a three day trip with me. Great job Tim!

Well, here we are in the dog days of Summer. Things get pretty slow for…

Awesome week in the Everglades Backcountry

Had a great week of Snook fishing in the Everglades this last week. Tom O.…