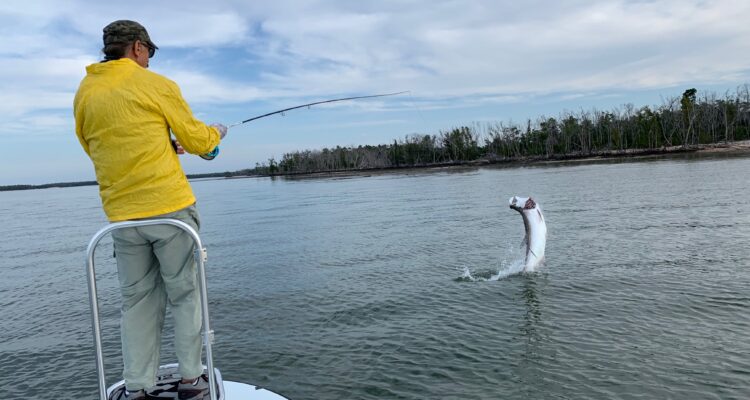 I guess the secrets out. There have been some Tarpon swimming around, and then the weather changes for the worse, and there they go. Then they’re back, and then gone again. My relationship with Tarpon is truly a Love/Hate one. Not unlike anyone else, I do like it a lot when they’re here, but when they’re not, I can’t cuss ‘em enough. It’s hard to explain to someone what it’s like to see a Tarpon jump, and the size of the “holes” they leave in the water when they land. I’ve heard Tarpon describes as the “perfect fish”, one that eats a fly (or pretty much anything else you throw at them), they can be small to large, they jump, they pull hard, and they’re shiny… they are an awesome fish! But I still dislike them, sometimes.

We had a pretty good day a week ago. We were fly fishing, which is what i do during Tarpon season mostly. We caught one, and jumped two others. I will admit, you can have days better than that, you can also have many days that are worse. But it really only takes one to make it an awesome day.

Well, mother Nature strikes yet again... Funny how the more the wind blows, the more…